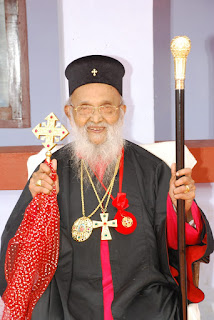 Today is the 5th death anniversary of Archcorepiscopa Dr. Curien Kaniyamparambil achen, fondly known as Kaniyamparambil achen. The Simhasana Church in Thiruvalla, where I now serve, has a long and deep relationship with achen as he touched the lives of several generations of families here. He was a scholar without parallel in the Jacobite Syrian Orthodox Church and respected among people from all denominations and religions. He was known for his scholarship, humility and hospitality. But I would like to touch upon a topic seldom discussed with regard to achen. He was a priest who overcame disabilities, the lack of hearing being primary among them.

Looking back, I feel that we never discuss the struggles and hardships of our ancestors and straight away harp on their achievements as if no struggles were involved or that they were so talented that they did not have to try too much. But achen had to overcome his hearing disability which then expanded to tremor (uncontrollable shaking of hands) and later on to finding it difficult to walk. Our communities want us to believe that priests and ministerial candidates are perfect and should be perfect. Medical check ups before bishop elections are only one example of this. But the most perfect of ministries are done by imperfect men and women and achen is a prime example of that.

I have heard other priests and people making fun of achen’s hearing disability and calling him a mute (pottan in Malayalam, which also has a derogatory meaning of being an idiot). All because he could not hear properly and one had to strain their voice while speaking to him! But instead of being bogged down and faltering under the weight of ill timed and unjustified jokes, he wrote and spoke like a man guided by the Holy Spirit. Many of us learnt to speak for long by listening to him. Achen made his disability into his ability. While we were being influenced by the sounds and temptations of the world, he sat for hours to read and write.

His major achievement of translating the Peshitta Syriac bible into Malayalam was done with these disabilities. He found the strength to overcome his tremor when he wrote and it came back when he had to do something else. He offered hundreds of prayers and services by reading lips and the actions of those around him. For me he has shown that one does not have to be ashamed of their disability but can rather embrace it and make it their biggest ability and asset.

I am reminded of St. John 9:3 where Jesus answers his disciples and says that “neither the man nor his parents have sinned, he was born blind so that God’s works might be revealed in him.” The St. George Simhasana Church in Thiruvalla is indebted to achen for showing us that we can overcome our disabilities and to know that our disabilities have opened our eyes to see our abilities. There are so many children and youngsters who think that they are not good enough and wont make the cut or mark in an examination or test and that they are not perfect enough as their family and society would want them to be. May God and achen be a source of inspiration so that we never feel bogged down and dejected. We thank God for his life and contributions and pray that several people will get the courage and strength to do their education through achen’s blessed intercession. Dear achen, pray for us, your beloved children.

jerry achens world by Fr. Jerry Kurian Kodiattu is licensed under a Creative Commons Attribution 2.5 India License.
Based on a work at www.jerryachensworld.blogspot.com.
Permissions beyond the scope of this license may be available at jerryachen@gmail.com.

"Don't do something for the sake of someone. Do it if you 'believe' in it."