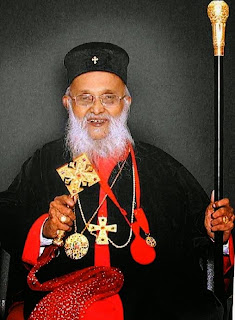 Arch Corepiscopa Curien Kaniyamparambil achen is celebrating his 103 rd birthday today. He has completed a century and three years of his life, bearing witness to church saints like St. Ignatius Elias III and church stalwarts like Mor Dionysius Michael, Gheevarghese Mor Gregorios, Perumpally, Mor Yulios Elias Qoro and several priests belonging to the Elavinamannil, Kodiattu and a host of other families.

In the course of all this he has taught Syriac to several generations of students, conducted the baptism, marriage and funeral of several people in the same family, translated several prayers from Syriac to Malayalam and written books on church history, faith and tradition. His simple slogan “Christ needs this donkey” has inspired him to work tirelessly for the church and its people. He was and still is an icon to the people of Thiruvalla having been there for close to sixty years of his life.

His deep devotion and belief in the intercessory powers of Mother Mary has seen him wear a relic of St. Mary within his shirt pocket almost like a bullet proof vest, safe guarding him from any problems in life. His intercessory prayers and songs to St. Mary for the eight day September lent have been used by hundreds of thousands of people officially and unofficially. His translation of the Syriac morning prayers into Malayalam is by far one of the best translations of prayer songs. The Archcorepiscopa will make sure to pray at least three times a day religiously and intercede to Mother Mary at all times. His belief in honoring his teachers (gurus) will always see him giving credit to them and to how they have made him who he is.

Arch Corepiscopa Kaniyamparambil achen never fought with anyone. When he had to come out of the St. George JSO church, Kattapuram, Thiruvalla, all he took with him was his tears which he continued to have years after the painful incident of having to walk out of one’s own church. After that he was instrumental along with the Kodiattu family to set up and consecrate the St. George Simhasana JSO Church in Thiruvalla. Through this church he kept the Jacobite Syrian Orthodox believers in Thiruvalla rooted to their faith and pastored to them despite a very unfavorable environment.

He collected the money from the faithful and used it for the upkeep of the church, printing of several books and helping the poor. I have never seen achen spending money for himself. He has collected every single donation and used it for helping others, printing books to keep up the faith of the people, and give to the church in one way or the other. This is not known to many. The St. George Simhasana church in Thiruvalla flourished under him.

Arch Corepiscopa Kaniyamparambil was a great orator in his youth. He was a constant invitee in several churches as his knowledge of the bible, history and tradition of the church and preaching style were un paralled. His Good Friday service in church was a great experience of feeling the passion and suffering of Christ. He had the skill to translate Syriac to Malayalam on the spot and he used this to explain songs and bring people into a spiritual mood by explaining songs after each stanza and creating a real effect of commemorating the passion and crucifixion of Christ.

Achen’s faith has always been an important part of his life. His prayers were simple but deep. It would give you the strength to undertake a journey, write an exam, undergo an operation, come out of grief and expect good things from God. This coupled with his sense of humour made one want to go and spend time with him. He was always available in the arm chair, with his legs up and constantly writing on his writing pad. The sight of any visitor would make him stand up and he would seek the strength of your hand and in return give you the strength of his prayer.

Have we lost out on such priests? In a way yes. A comparison may be too harsh on the present generation of priests. The Arch Corepiscopa lived in an era where he had no mobile phone, no internet, no facebook and no luxury car. He lived in ordinary circumstances and perhaps that was what made him who he is even today. One inspiration for the priests of today would be his interest and his effort to write. His accomplishment in this direction is great. A list of 50 books and counting is not any average Syrian Orthodox priest for you! There would not have been a day without achen writing a page or two. This has been lost on today’s generation of priests. His single handed translation of the Syriac Peshita bible from Syriac to Malayalam has been the most understated fact in recent times. Who on earth can single handedly do something so difficult like that? Perhaps we should give the writer in Archcorepiscopa Kaniyamparambil more credit than he has received thus far.

Jesus wrote and he wrote so that he would be accountable and he would make others accountable. John 8:1-8 bears witness to that. Arch Corepiscopa Kaniyamparambil achen also wrote to be counted, to be held accountable and to stand up for what he believed in. Today history will attest to that. Unfortunately today’s generation of priests may not even write a status update on their own. I may be wrong and I will be happy if I am proved wrong. Kaniyamparambil achen should be an inspiration for us to write for the glory of God and write so that people may understand God’s word and will be kept in faith.

Humility is a character trait of Kniyamparambil Arch Corepiscopa that today’s priests should learn from. Anyone from around the world and Kerala could and can meet him any time. If he is awake and healthy one can meet achen. This is associated with his humility and his eagerness to meet people who go to see him. I wonder whether today’s priests are so eager to meet their congregation, chat with them and offer them advice and guidance? This again cannot be generalized.

Faith, hope and love have always been part of Kaniyamparambil Arch Corepiscopa’s repertoire. He has the faith as big as the mustard seed which can have him tell you to go in peace, God will help you. He has had his share of misfortunes and he has also been on the wrong side of decisions taken by higher ups. But he never gave up hope and always went forward. He was betrayed and used by his friends, colleagues, students and disciples. But this has not decreased his love for them. He still holds everyone with equal fondness and never speaks ill of or works against another. His love for another human being has been exemplary and this is something we can definitely emulate. What would one expect of a priest? These three things in all probability. A priest should be able to offer faith as healing to his congregation, should have hope that whatever the situation, God will help and that love and only love is God like and will take a church forward. This has somehow been lost in translation today. I hope that the Arch Corepiscopa can remind us that today for his sake we can rekindle these three in our ministry in the church.

Forgiveness has come naturally to Kaniyamparambil Arch Corepiscopa. When you meet him you feel the love he has for you and not the hatred. This has been possible through his efforts to forgive and seek forgiveness. Who won’t melt and change when a 103 year old priest asks you for forgiveness even when you have been the one who may have committed the wrong! This is what achen has done all through his career. It has not just been his willingness to forgive but his over willingness to seek forgiveness even when he never did anything wrong. This is a true lesson for priests today. A priest’s effort should not be to justify but to ask forgiveness even when there is a doubt in our mind and to give forgiveness when someone comes to us seeking for it. A priest should be a fountain of forgiveness which never dries and Kaniyamparambil Archcorepiscopa has borne testimony to this.

What then can we offer Kaniyamparambil Archcorepiscopa for his 103 rd birthday? If you speak to him he will ask us to pray for him and he will then utter “God bless you.” Even in his request there is something for us. The only way we can give him a gift which will compensate his stature is to pick any one quality of his and emulate it. It could be humility, faith, hope, love, writing, forgiveness, saving for the future generations, right use of funds and anything that I haven’t mentioned. At this age and at this stature I suspect there is anything on earth that we can get for him. If he can live on forever that will be a great blessing for this church. One way that is possible is to take a commitment that each priest and lay person will take one quality or several qualities of the Archcorepiscopa and live it out through our lives so that achen will live and live abundantly.

Here’s wishing our beloved Archcorepiscopa Dr. Curien Kaniyamparambil a blessed birthday, good health, an active mind and long life. Beyond everything here’s praying and committing that we take one part of your noble character and live it out remembering what you have told and showed us.

Interesting article to read. Thank you.

jerry achens world by Fr. Jerry Kurian Kodiattu is licensed under a Creative Commons Attribution 2.5 India License.
Based on a work at www.jerryachensworld.blogspot.com.
Permissions beyond the scope of this license may be available at jerryachen@gmail.com.

"Don't do something for the sake of someone. Do it if you 'believe' in it."